Dr Emma Humphreys-Williams is the chemical laboratories manager at London’s Natural History Museum, one of the most famous museums of life and Earth science in the world. Its chemical labs are dedicated to bulk and in-situ analysis of samples from the museum’s collections, along with collaborative work with universities and other organizations.

The work of these laboratories relies on a wide variety of instruments and methods, mainly focused on the elemental characterization of natural science samples. To remain at the cutting edge of scientific research, the team is constantly updating its equipment to stay relevant and perform the best possible analyses.

When it became necessary to replace the labs’ existing elemental analyzer, which was ageing, a tender was put out to find a new supplier. As a publicly-funded body, the Natural History Museum strives to be transparent during any procurement process, meaning the tender was advertised widely, and all of the manufacturers that responded were thoroughly tested. Dr Humphreys-Williams’ team chose to purchase a vario EL cube elemental analyzer for the analysis of both organic and inorganic samples, after the results from Elementar suggested this instrument would meet their demanding requirements.

The museum has a long history of using CHNS analyzers of this type for the study of rock samples and was one of the first labs to start performing this type of analysis. Since being installed by the team, the vario EL cube has been used for the analysis of a variety of samples - including rocks, soils, leaves, wood, minerals and termite mounds - to identify their structural volatile element content.

When assessing rocks, Dr Humphreys-Williams’ researchers were mainly interested in the hydrogen and carbon contents of the rock samples, but they have also used the IR detector to analyze low concentrations of sulfur in rocks. The instrument has ably complemented the analysis of the elemental composition of rocks they already perform via digestion and analysis using ICP-OES and ICP-MS instruments.

However, the applications of the vario EL cube have gone beyond the analysis of these natural samples and have also been used in the study of photographic film. For this work, Dr Humphreys-Williams worked closely with Konstantina Konstantinidou, the museum’s paper conservator, who is responsible for conserving and advising on the preservation of paper-based collections, such as artworks, manuscripts, historic labels, etc. as well as advising on the preservation of photographic material like film, photographs, slides and X-ray film collections.

The team was able to use the vario EL cube for organic elemental analysis of its archival X-radiography materials, to determine which film sheets were made of cellulose nitrate, and therefore needed to be separated from the cellulose acetate or polyester-based materials for safety and conservation purposes.

The findings of this innovative study were published in the journal Studies in Conservation, and demonstrated that organic elemental analysis using the vario EL cube was an extremely useful method for identifying cellulose nitrate, as it proved to be more straightforward, quicker, accurate and reliable than other recommended tests, such as the float test or FTIR analysis.  This method was also found to have the potential to provide an insight into the degradation of the cellulose nitrate film base.

Commenting on the performance of the vario EL cube, Dr Humphreys-Williams said:

“The vario EL cube gives precise and accurate results on a range of sample materials, and has proved particularly useful in the analysis of rocks, plants and soils. We have also found it to be useful in the conservation of some specimens in the collections, identifying their chemical composition.

“The flexibility of the setup and trap and purge system allow for a large variation in sample types. From single minerals weighing a few milligrams to bulk rock samples, the instrument can be configured to give reliable data.”

The Natural History Museum in London is one of the world’s most prestigious museums, ranking as a world-class visitor attraction and a leading science research center. The facility houses more than 80 million objects, spanning billions of years, and welcomes more than five million visitors annually.

Using a combination of in-house expertise and cutting-edge research techniques, the Natural History Museum is pushing forward scientific understanding of the solar system, Earth's geology and life on this planet, including key studies into UK biodiversity, identifying new sources of food and predicting the spread of disease.

Its chemical analysis team, led by Dr Emma Humphreys-Williams, uses specialist techniques to determine the concentrations of elements and chemical species in a wide range of biological, geological and synthetic samples for various projects. 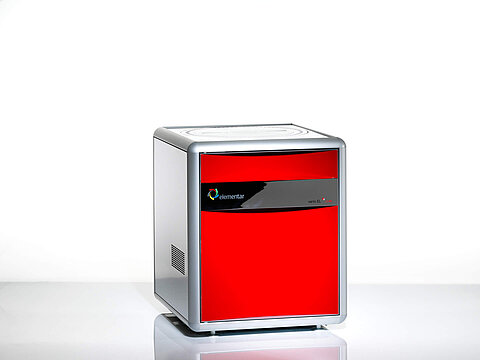